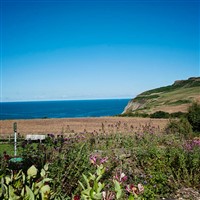 Following in the footsteps of Captain James Cook, we visit Guisborough, Saltburn home of the world's oldest water

The golden sands, under which lay the remains of an occasionally revealed 7,000 year old forest, are framed by the swimming-quality waters of the north sea and a bustling town centre; home to high street names, quirky independents and not to mention a selection of amusement arcades, fish ‘n chip shops and the legendary lemon top ice cream.

The gateway to the North York Moors National Park, Guisborough is a crowning glory for Redcar & Cleveland. The quaint but bustling Westgate plays host to national chains and independent boutiques, boosted by regular open-air markets and a welcoming atmosphere. The world famous Guisborough* Priory, the remains of a 14th-century church, stands guard over the town. An outstanding example of early gothic architecture, the Priory attracts visitors from all over the world. The Priory is a relaxing sanctuary away from the hustle and bustle, and plays host to a programme of family events and musical performances throughout the year.

Described by Saltburn-born rock legend David Coverdale as the ‘jewel of the northern Riviera’… Saltburn-by-the-Sea is a picturesque Victorian seaside resort which offers visitors beautiful gardens set among preserved woodland, long stretches of sandy beach and rugged sea cliffs. Journey between town and beach with a ride on the oldest water-balanced lift in Britain, the Saltburn Cliff Tramway which disembarks alongside Saltburn’s magnificent 600ft long Victorian Pier, the sole surviving example on England’s north east coast.