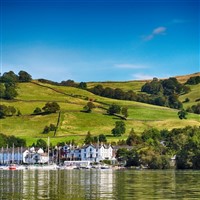 The town’s most famous export must be Kendal Mint Cake. Joseph Wiper came up with the original recipe for the Everest conquering energy bars, and by the time the company was sold to rival mint cake makers Romneys, there were a number of local firms producing their own brands. Kendal’s manufacturing industries all but vanished after the demise of the canal in the 1940’s, with the first few miles of the canal from Kendal onwards being filled in and turned into building land, footpaths and cycle ways.

Today the town is home to a thriving retail sector, with no less than five shopping arcades; K Village, the Westmorland Shopping Centre, Blackhall Yard Shopping arcade, the Elephant Yard and Wainwright’s Yard. The Town Centre has recently mostly been pedestrianised and offers a safe connection point for all these shopping areas.

Kendal is home to a multitude of historically exciting buildings, including the parish church on the river side in Kirkland, a number of houses and office buildings designed and built by renowned local architects, the 14th century Castle Dairy, Kendal Castle and Castle Howe, Abbot Hall Museum, Kendal Museum, a host of churches and chapels and rows of houses built from the 1600’s right through to the present day.

In fact the radio broadcaster, historian and famous son of Kendal, David Starkey, once stated that Kendal could have been like York, if only they hadn’t knocked down so many of the historical buildings. Such was the zealous attitude of the town’s councils towards moving with the times, that, at various times in the last hundred years, great swathes of Kendal’s architectural gems have been demolished to make way for roads and housing developments.

Ambleside, a small town in the Lake District, has now become a major tourist resort with shops, restaurants & cinema. It is very popular with walkers and climbers and is one of the best bases for exploring the Lake District. The Windermere lake ferry terminal at Waterhead Pier dates back to 1845. Today ferries can be taken to Bowness and Lakeside pier near Newby Bridge, Wray Castle and Brockhole Visitor Centre. A short walk from the centre of the village leads to Stock Ghyll Force, a spectacular 70 foot waterfall which may be viewed safely from a railed viewpoint. In spring the area under the trees is a carpet of daffodils. Once there were 12 watermills driven by the power of Stock Ghyll and other local becks. The 17th Century Bridge House over Stock Ghyll beck is one of the most photographed scenes in Lakeland. It is owned by the National Trust. You can visit without charge to see the 2 sparsely furnished rooms.